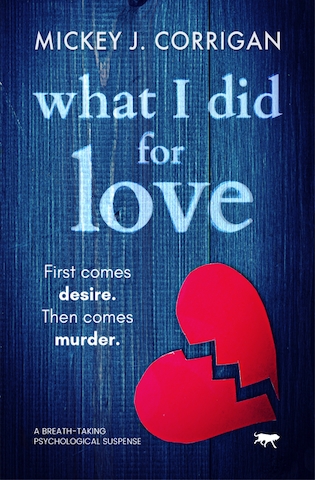 What happens when a teacher falls for her student?

After her seventeen-year-old student fails to live up to his potential in class, Cathriona O’Hale conducts a parent teacher meeting with the boy’s widowed father. He is attractive, intelligent, and exceedingly wealthy, everything an unmarried middle-aged woman would normally find appealing.

But Cath is not your average forty-something. She’s a wild card who has a crush on the man’s teenage son.

Cath finds herself juggling father and son while battling the true source of her lust and forbidden love. So when the father of the object of her obsession proposes, she has a choice to make:

And when her decision is made, the consequences might just be deadly…

Welcome to my stop on the tour for Mickey J. Corrigan’s new release, What I Did for Love! When I saw this tour, I had never read anything by this author, I thought it sounded unique and decided to give it a try. This is about Cathriona O’Hale, an extremely intelligent, Ph.D. level English professor. After working at a university for a while, she decided to give high school a try, seeking less stress and hours. Another bonus was to be around all of the beautiful young high school boys – her personal preference in men. After a parent-teacher conference with the parent of her favorite student, whom she calls Mojito, Cath begins a relationship with Mojito’s dad, whom she calls Mr. Mojito, in order to be close to her love without drawing attention to herself.

Many of you that follow my blog are probably wondering why I read this and thinking that it sounds somewhat ridiculous. Well, in a way, it was. However, I pushed onward and finished it over the course of a few days. Is it a horrible novel? Absolutely not. Is it a five-star read? Absolutely not. I’ve seen several reviews where the readers are critiquing the subject matter itself and expressing how the offensive nature of the book and main character herself put them off from enjoying it. It says in the blurb that it’s about a middle-aged woman crushing on a teenager people! Why did you read it?

Moving on from that, here is what I liked/respected/admired about the novel. Mickey J. Corrigan has an intelligent and unique writing style. Her love and appreciation for language were evident from beginning to end, especially her imagery. Told from Cath’s POV, sometimes the imagery was a bit too much, especially one time when she is describing Mr. Mojito’s breath when he kissed her, nevertheless, her vivid descriptions were effective and appropriate. I also appreciated the raw and honest characterization of Cath. This woman had no redeeming qualities at all except maybe her intelligence. Otherwise, she was a horrible, unlikable character – as were most characters in the novel. But I don’t think the point was to like Cath at all, the point was to show the innermost thoughts and feelings of this woman whether you like or agree with them or not. Cath was a brilliant alcoholic that liked very young men, had no friends and decided to marry the rich father so she could be around Mojito as his step-mother. Likable? No. Well-written character? Yes.

There were certainly some things that drove me crazy in this novel. First and foremost, the nicknames of Mojito and Mr. Mojito. Besides her love of alcohol, I didn’t understand the reasoning for these names. Secondly, some of it was just too unbelievable, mainly the amount of alcohol consumed in this book. I love drinking with the best of them – especially wine – however, Cath and Mr. Mojito should have been dead in the first 40-50 pages based on their alcohol consumption. Moreover, what was the point of the level of drinking in the book? I somehow missed the significance, if there was any. Lastly, the ending really fell flat for me. I’m not sure what exactly I wanted, but this wasn’t it. There was all of this build-up as Cath became more desperate to be with Mojito, slowly revealing her plan, enacting the plan, and so on. Then that was it. I briefly got excited when she begin recalling her summer camp experience at the end thinking it would be some huge key to who Cath was, but no. Nothing.

There was no great finale in this novel. There were no big twists or surprises. Cath drinks and unravels throughout the novel because of her obsession with Mojito. But maybe that’s the point of the novel and the title What I Did for Love? People do senseless and ridiculous things in the name of love, but luckily, not always like this.

*Thanks to Xpresso Book Tours and Bloodhound Books for providing this ARC in exchange for my honest opinion! 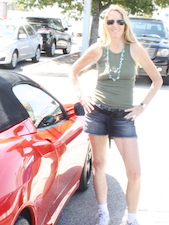 Originally from Boston, Mickey J. Corrigan writes pulp fiction, literary crime, and psychological thrillers. Her stories have been called “gritty realism,” “oh so compulsive” reads, and “bizarre but believable.” Her novellas and novels have been released by publishers in the US, UK, Canada, and Australia. Salt Publishing in the UK released her satirical crime novel about a school shooting in 2017. Visit at http://www.mickeyjcorrigan.com

1 thought on “Book tour, review, & giveaway: What I Did for Love, by Mickey J. Corrigan”

Honest Recommendations On the Best Books of 2020

The rebirth of some vintage camper trailers

Down in the Lumps
The Art of Blogging
The Caffeinated Chapter

YA author supporting other authors

bcranfordcom.wordpress.com/
A R C H I P E L A G A L